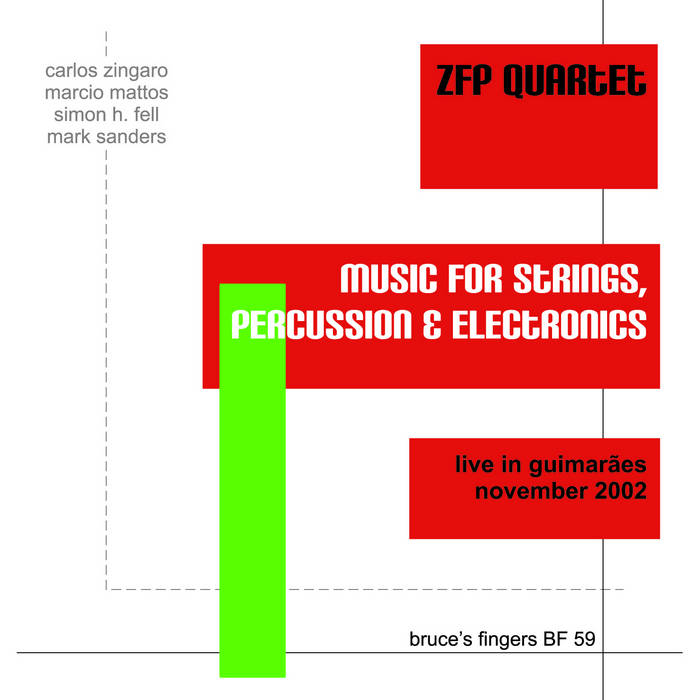 In 2002 Ivo Martins of Guimarães Jazz invited Carlos Zingaro and Simon Fell to create a new group for that year's festival; the pair combined their existing duo with the duos they both had with Marcio Mattos, adding Mark Sanders to make this superbly textural sumptuous-sounding ensemble. Recorded live at Guimarães Jazz 2002 - the group's first performance.

"British contrabassist and composer Simon H. Fell is always involved in a huge number of projects. While each one of them bears the trace of his first love - boomin', no holds barred free improv - Fell is one of those most interesting players who, like Anthony Braxton, seems omnivorous in his musical desires and always capable of delivering on them. Drawing from a very wide range of idiomatic sources, the ZFP Quartet deliver a fascinating fusion on Music for Strings, Percussion & Electronics. The title is an obvious nod to Bartok, and it's hard not to sense that Zingaro, Mattos, and Fell are channeling some of the great composer's late string quartets (though not necessarily the large ensemble piece that inspired the title). Certainly this music, a compelling blend of improvisation with slivers of referential material (which are naggingly familiar but not through-composed), is dense enough right from the start to earn that comparison. But it's got more than enough bracing, detailed sections to earn its own identity. You get a lot of the subtle technical nuance of Fell's chamber-improv trio IST, whose fascination with spectral overtones is present here (and may constitute a link to the fascinating work of Gerard Grisey). But you also get a muscular free improv element (much of it courtesy of Sanders' always fascinating, post-Lovens drumming). There are plenty of moments when slashing and sawing seem to be the order of the day, when - like the excellent Quatuor Accorde strings improv group from London - intensity and detail combine to overwhelm the senses. Yet they contrast nicely with instants where gentle pizzicato, hypnotically vibrating arco, and delicate percussion create a compelling tranquility. There are naturally many passages for solos, duos, and trios in addition to the full quartet (particularly compelling is a thudding duo for Fell and Sanders at the mid-point of this 50 minute piece). And there is a rapturous passage for electronically modified strings later in the piece. But it's really the eldritch group language that compels, from the explosive beginning to its slow, groaning conclusion. A fine disc, well worth seeking out." Jason Bivins DUSTED

"This recording comes from a performance in Guimaraes, Portugal, yet in terms of sound quality it's comparable to a top notch studio album. It contains some of the best string playing on offer in recent times, whose depth comes from contrapuntal energies springing from deep within the wood of the instruments (the ghosts of Webern and Ligeti are duly summoned forth) and is enhanced by the sober use of processing. Individual voices remain at one and the same time audible and coherent with the whole design, the musicians remaining fully aware of their position and going to great pains to leave sufficient open sky between the frequent patches of turbulence (special mention should be made of the incredibly sensitive Sanders), never tripping over each other's feet, completely in awe of the mysterious and bewitching creature they've given birth to." Massimo Ricci PARIS TRANSATLANTIC

"There are few musicians whose work spans as broad a range as Simon Fell. As composer, improviser, and accomplished bass player, Fell's restless creativity consistently shines through in a mind-boggling range of contexts. What is astonishing, though, is how he manages to pull all of his various interests together into an overarching vision, whether developing settings that synthesize composition and improvisation for both large ensembles and small units; using the studio to "recompose" densely orchestrated improvisations; pushing at the edges of acoustic "ghost notes" with the trio IST; or diving in to skirling free improvisations. Music for Strings, Percussion, & Electronics certainly elicits Bartok's Music for Stings, Percussion, and Celesta but any direct homage ends there. This is purely a collective effort convened by Fell and violinist Carlos Zingaro for this debut performance. Both Fell and Zingaro had worked with cellist Marcio Mattos so that grouping seemed a natural. With the predominance of strings, there are clear allusions to chamber settings, but the addition of Mark Sanders on drums (with whom Fell has played for over a decade) adds an element that pushes the music into more forceful areas of interaction. Each of the string players has a dazzling command of their instruments, from dark arco to percussive pizzicato to quavering harmonics and skittering overtones. As in a string quartet, each of the players carve out a particular space in the ensemble even as the various voices meld together into a collective whole. Zingaro and Mattos also extend their palette with the subtle integration of electronics, coloring the sound with ghosted timbres and textural refractions of the acoustic instruments. Sanders knows exactly how to fit in here, layering in drums and percussion with a feather touch and lightning responses. The four mesh so well that it is hard to believe that this was their first performance. The music gels from the start as they weave together a kaleidoscopic group improvisation. There is a balance of densely packed four-way interaction; sections of quiet sonic abstraction; and areas where the players let loose into extended solos, duos, and trios. There is never a moment over the course of the fifty-minute piece where the focus wavers, from the first angular stabs to the final moments of lush, layered arco and electronics that subside into a pool of silence. This is group improvisation at the highest level and the warm, clean recording captures every nuance." Michael Rosenstein SIGNAL TO NOISE

"On Music for Strings, Percussion & Electronics violin, cello and bass are mulched into one enormous Godzilla-like string monster that oozes onwards. Percussionist Mark Sanders is a brilliant thrower-of-spanners-in-the-works (lest things get too comfortable), while incongruous outbursts of soaring cello melodies and Stephane Grappelli-like violin add a surreal twist to an already inscrutable situation." Philip Clark DOUBLE BASSIST

"The ZFP Quartet's live 2002 performance is a study in expertly controlled chaos. Jason Bivins, always one of the most insightful writers about improvised music, hears Bartok's later music channeled in this session, and it's a stunning observation. Especially in some of the sections devoted exclusively to strings, there is a frail subtlety, almost somber, that simply moans Bartok's last quartet. This might go a short distance toward explaining the title, but as with any Fell offering, there are many more ingredients. Space, both between sounds and on the soundstage, is expertly handled throughout. I enjoyed the distinct illusion of three-dimensionality, as Carlos Zingaro's violin and Marcio Mattos' cello dipped and weaved in what sounded to me like semicircular patterns in space. The whole atmosphere is sparse, intricate, and free in the best sense. As I play back an interview with Fell, I realize he's said nothing, not word one, about this own playing. His Braxton comment comes the closest, as Fell's arsenal of techniques mirrors the intensely physical transcendence of Braxton's playing on a disc like For Alto. This is why ZFP's percussionist, Mark Sanders, is such a good sparring partner for Fell; their playing captures the non-linearity of Fell's compositions, somehow also exuding logic and reason. Fell exemplifies the truly integrated composer/musician, and his final comment to me reveals his own process: "I certainly hope you can boil all that down into something useful." Marc Medwin ONE FINAL NOTE

"Music For Strings, Electronics & Percussion dwells in an ultraserious environment where the output from strings and percussion is augmented with tasteful electronics. Violinist Zingaro, cellist Mattos, and bassist Fell form a strong contingent with their electrifying execution, while Sanders splashes the canvas with subtle colors from his drum palette. The music hints at a European classical foundation combined with the Gypsy aesthetic, but it ultimately is a study of interlaced freeform strings dancing wildly to percussive punctuation without ties to any preconceived genre. Mattos fuels the fire with dense bowing while Fell provides pizzicato robustness, allowing Zingaro to soar openly over the lower string/drum tones. The musicians navigate through one recordlength piece building an ethereal haven frequently disrupted by vivid examples of energized playing. Bell-toned electronic pinpoints creep into the movements while the fury builds, only to seep to calming depths of mournful solemnity. At times, Sanders inputs deeply penetrating drumming as an offset to his more subtle use of brushes. The music wanders into turbulent territory where all four musicians stir a crackling cauldron that boils over with enthusiasm before nestling into calming serenity. The strings smolder from the furious stroking and then cool momentarily before the next onslaught. The artists also improvise simultaneously at differing tempi, as when Fell plucks rapidly and Sanders drums excitedly while Zingaro and Mattos march at a much slower pace. This quartet produces exhilarating music of significant substance to feed the adventurous listener." Frank Rubolino CADENCE

Bandcamp Daily  your guide to the world of Bandcamp

Featured sounds from Fly Lo and Ahmed Idris, plus Mother Nature hops on to drop off new project